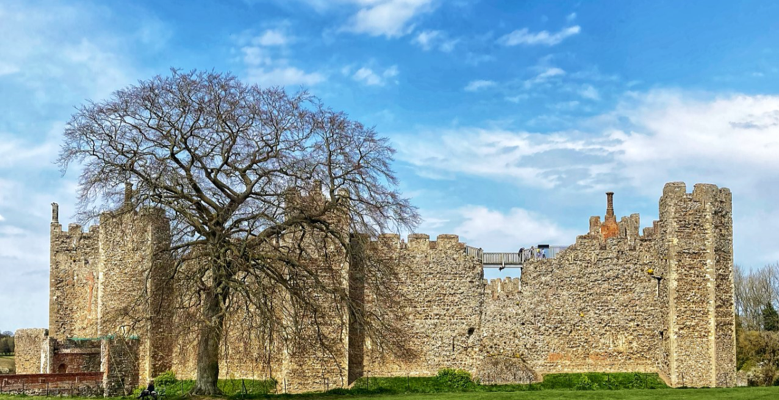 The Suffolk market town of Framlingham has gained global recognition over the last few years as the inspiration for the song Castle on the Hill, but there is a rich history linked to the town, ready to be explored. Framlingham is noted in the Doomsday Book of 1086 and since then has played a role to some key figures of British history.

Top of the list of historical sights to see in Framlingham has to be the castle. When walking through the town, it is impossible to miss.

Built in the 12th Century, the castle originally fell under the ownership of the Bigod family, who at the origin of the castle, held the title of Earl of Norfolk. The family briefly lost possession of the castle in 1216 when King John laid siege to it, as payback for the fact that Roger Bigod, the second Earl of Norfolk, was one of the twenty-five barons involved in making the king sign the Magna Carta in 1215. Eventually the castle was returned to the family and they remained the owners for almost 400 years, though it changed hands through to the Brotherton branch of the family, then inherited into the Mowbray line of the family.

In 1476, the castle passed to John Howard (who held the title at this point of Duke of Norfolk), and it was here that vast renovations were carried out to modernise the building. John Howard was a Yorkist supporter during the Wars of the Roses and died at Bosworth. When the Lancastrian King Henry VII took to the throne, the castle was confiscated from the Howard family. John’s son Thomas eventually regained favour with the king and had his lands and title restored. The Howard family only held onto the castle for three generations though, ending with the 3rd Duke of Norfolk, also called Thomas. He is that Thomas Howard. The key player within the Tudor court who was uncle to both Anne Boleyn and Catherine Howard. He lost possession of Framlingham when he was arrested and imprisoned in the Tower of London after falling out of favour with Henry VIII and supporting the claim that Mary Tudor should be next in line to the throne. He narrowly avoided execution due to Henry conveniently dying the day before the execution date. The new king Edward spared him the executioners block, but kept him imprisoned, and Mary Tudor was given Framlingham castle.

It was at Framlingham Castle in 1553 that Mary gathered her forces after receiving word that her brother was dying and that she should return to London. She was astute enough to know that the call back to London may be a trap by the Protestant faction who did not want her on the throne, and instead formed a plan while safe behind the fortified walls of Framlingham. As her support base grew, helped by her popularity and the fact very few people had even heard of Lady Jane Grey, who had practically been forced to take the throne by her overly ambitious father-in-law. Mary was officially named the first ruling queen of England on 19th July 1553 by the Privvy Council, receiving the news at Framlingham Castle.

Over the following centuries, the castle changed through various hands, becoming a house for the poor in 1729, at the instruction of a former owner following his death. In 1913 it fell into state guardianship, until 1984, when it was taken on by English Heritage. You can book tickets here to explore inside the castle and walk the walls, which offer some incredible views of the surrounding countryside. It is definitely worth taking a walk around the outside of the walls too, which is free and makes an excellent dog walk, or taking a picnic to enjoy in Castle Meadow.

The Howard family has already been mentioned in their link to Framlingham Castle, but it is in St Michael’s Church, just down the road from the castle, that you can find the family tomb. The Howard family found their way into the Norfolk line via marriage into the Mowbray family. The Howards originally came from around the King’s Lynn area, and had been traditionally buried in their family vaults at Thetford Priory. It was only during the dissolution of the monasteries that the tombs were moved. After Thetford Priory was destroyed, Thomas Howard, the 3rd Duke of Norfolk, decided on the new resting place in St Michael’s, as it was local to the castle he owned.

But it is not just the Howard family whose tomb you will find here. You can also see the tomb of Henry Fitzroy, bastard son of Henry VIII, as he married the daughter of Thomas Howard, Mary. He died in 1536, but if he had lived, it is possible that history could have been very different.

The church is open for visitors, so you can go and see these for yourself (just make sure there isn’t a service in progress!). If you’re not able to get to Framlingham for a visit, the church’s website has a wealth of information on the tombs, which can be found here

The Tomb of Thomas Mills

An interesting historical site can be found in a residential garden. If you’re not aware that it is there, then you might just walk straight past without taking any notice. In the garden of Tomb House, on Station Road, you can see the tomb of Thomas Mills, a wealthy businessman and key benefactor in Framlingham history. But it is not just Thomas Mills buried here; his “faithful servant” was also buried here when he passed away ten years later.

The tomb is clearly visible from the path, so you don’t need to worry about wandering into anyone’s garden to view it!