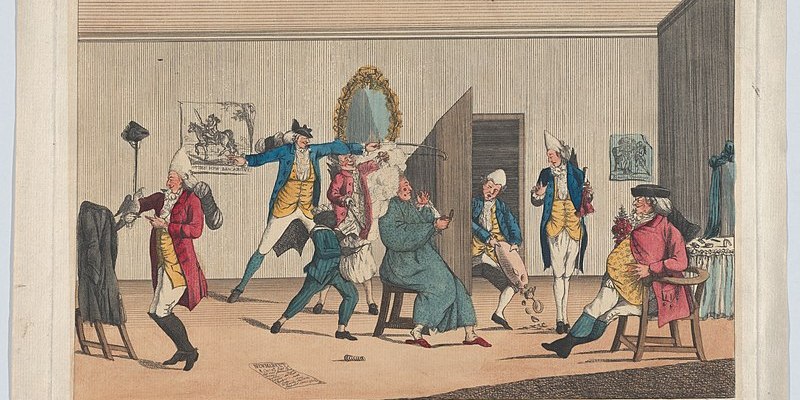 If one was to stick a feather in their cap, one may be called an extravagant, outlandish dandy, or, more simply, a ‘Macaroni’. The image above depicts one such character, posing in a style that would single him out to most members of 18th century British society, for they were known as much for their extravagant taste in fashion as their extravagant mannerisms and lifestyle.

Philip Dawe, who produced the above image of the Macaroni, was an artist and satirist known for his skill in creating mezzotints. This was a process of engraving and printmaking developed in the 17th century, notable for its use of light and shade, rather than lines, to form images. Its popularity, especially for portraiture, came from its ability to be produced en-masse, making it considerably more affordable and quicker to produce than an original painting. This demand in itself highlights a form of growing consumer culture, however, this was deemed an acceptable form of consumption, whereas the Macaroni’s with their ostentatious and often expensive lifestyle, was not.

This expense is best seen in the origin of the term ‘Macaroni’. For those with sufficient means (meaning time, money and rank), the rise of the Grand Tour in the late 16th century became a rite of passage, allowing young men to travel through Europe in the name of education (though there were other motivations too, I’m sure). Upon their return these men, along with the usual souvenirs, brought back European ideas of culture, as well as the pasta they would soon be named for. However, as was seen in the first copy of The Macaroni and Theatrical Magazine in 1772, this was not always a term of endearment,

…the word Macaroni then changed its meaning to that of a person who exceeded the ordinary bounds of fashion; and is now justly used as a term of reproach to all ranks of people, indifferently, who fall into this absurdity.

And it was these ‘bounds of fashion’ that truly marked them out as different. In the image of our Macaroni what is first notable is the large, flamboyant wig topped with a small tricorn hat. Wigs were expensive and one of this grandeur not only would have been extremely costly but served no real practical purpose. The same can be said of his clothing, with its frilly lace cuffs, delicate shoes and stripped stockings fitted to show off his shapely calves. The whole look is finished with a spray of posies that simply adds to the effeminacy of the ensemble. Even his background is presented as feminine, with its swags of material and highly decorated dressing table, complete with the pots of make-up that now don his narrow features. Of course, the Macaroni depicted was of no one in particular. It was Dawe’s satirical caricature that was meant as an exaggeration, meant to causing knowing giggles, and meant as commentary on the way society was heading.

Although the Macaroni can be used to highlight the rise of consumerism, alternatively, the contemporary politician, Horace Walpole, believed them to be a metaphor for the draining of the economy. He once lamented,

‘…. What is England now? – a sink of Indian wealth, filled by nabobs and emptied by Maccaronies!![1] A senate sold and despised! A country over-run by horseraces! A gaming, robbing, wrangling, railing nation, without principles, genius, character or allies; the over-grown shadow of what it was!’.

The Macaroni was a point of derision, through an, albeit caricaturized, imagery of decadence and extravagance, showing a contemporary concern regarding this potentially impractical drain on the economy. However, as was seen in popularity of the mezzotint itself, consumerism was not wholly thought of as a negative thing, so why were these men in particular so singled out? Was it perhaps because of the perceived homosexuality that had become associated with this dandy? The focus on their effeminacy and questions surrounding their sexuality and ‘true gender’ (they were sometimes described as ‘hermaphrodites’ or of ‘doubtful gender’) not only called into question what it was to be a man in this period, it also questioned the very masculinity that this patriarchal society was built upon. Or perhaps it was because this increase in luxury was being consumed by the rising middle-classes? Many of whom were adopting this style not only to show off their adventures across Europe but also, their new-found wealth. This rise of the bourgeoisie threatened the stability and power of the ruling class, an elite group of men, such as Horace Walpole, whose power came from their inherited, aristocratic, position. Whatever the reason (though I believe it’s a case of “all of the above”), at the center of this, is the image of man pushing the boundaries of fashion. Whilst even now their costumes may be the cause of the odd giggle, the Macaroni stands as a historical character we may understand today.

He was a man who used fashion to not only create an identity for himself but also used it to blur the lines of gender, pushing the boundaries of what some parts of society thought acceptable. Of course, there was more to his character than the clothing he wore, however, the difference between ‘consumerism’ and a ‘drain on the economy’ was simply a well-placed posey.

Featured image courtesy of Wikimedia Commons. No changes have been made to this image.